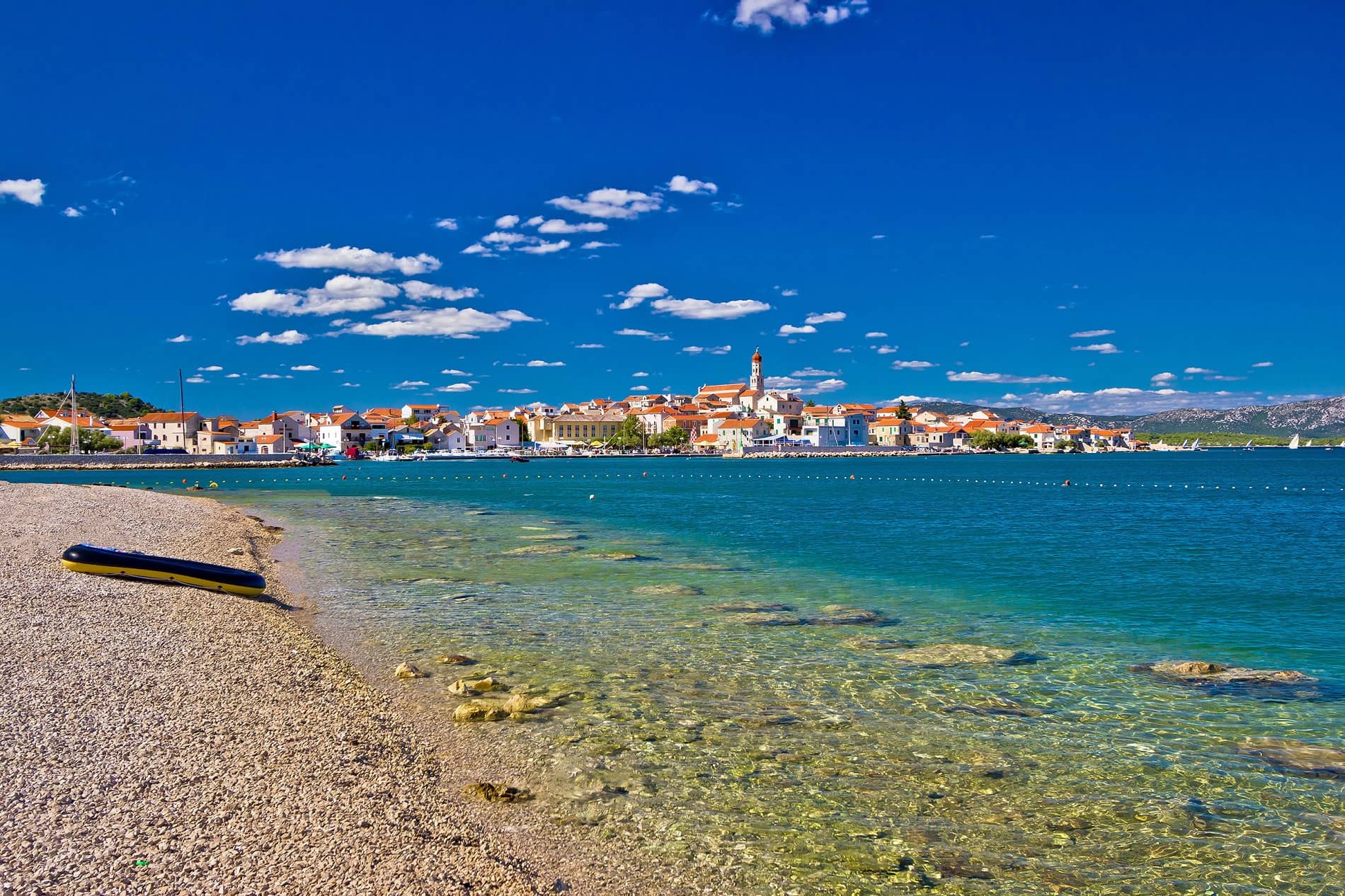 Welcome to beautiful Betina on island of Murter

Betina is a small tourist place located 35 km west of Sibenik on the northeastern coast of the island of Murter which is linked to the mainland by a mobile bridge in Tisno. 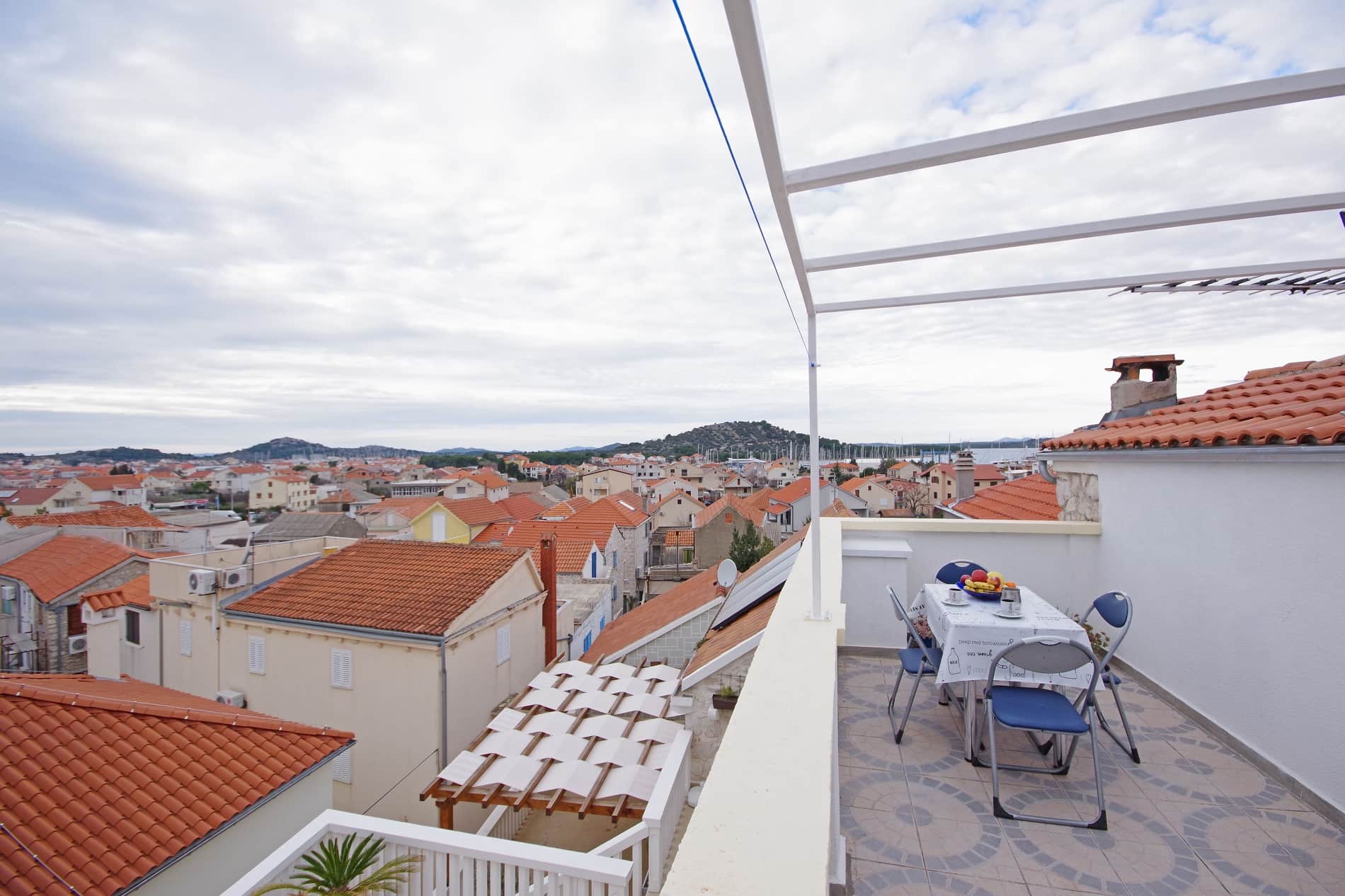 Terrace with a beautiful view of Betina and the sea

The terrace of 10 m2 is located on the third floor of the house. It is available for use by all guests for relaxation and enjoying the view on Adriatic sea and Betina. 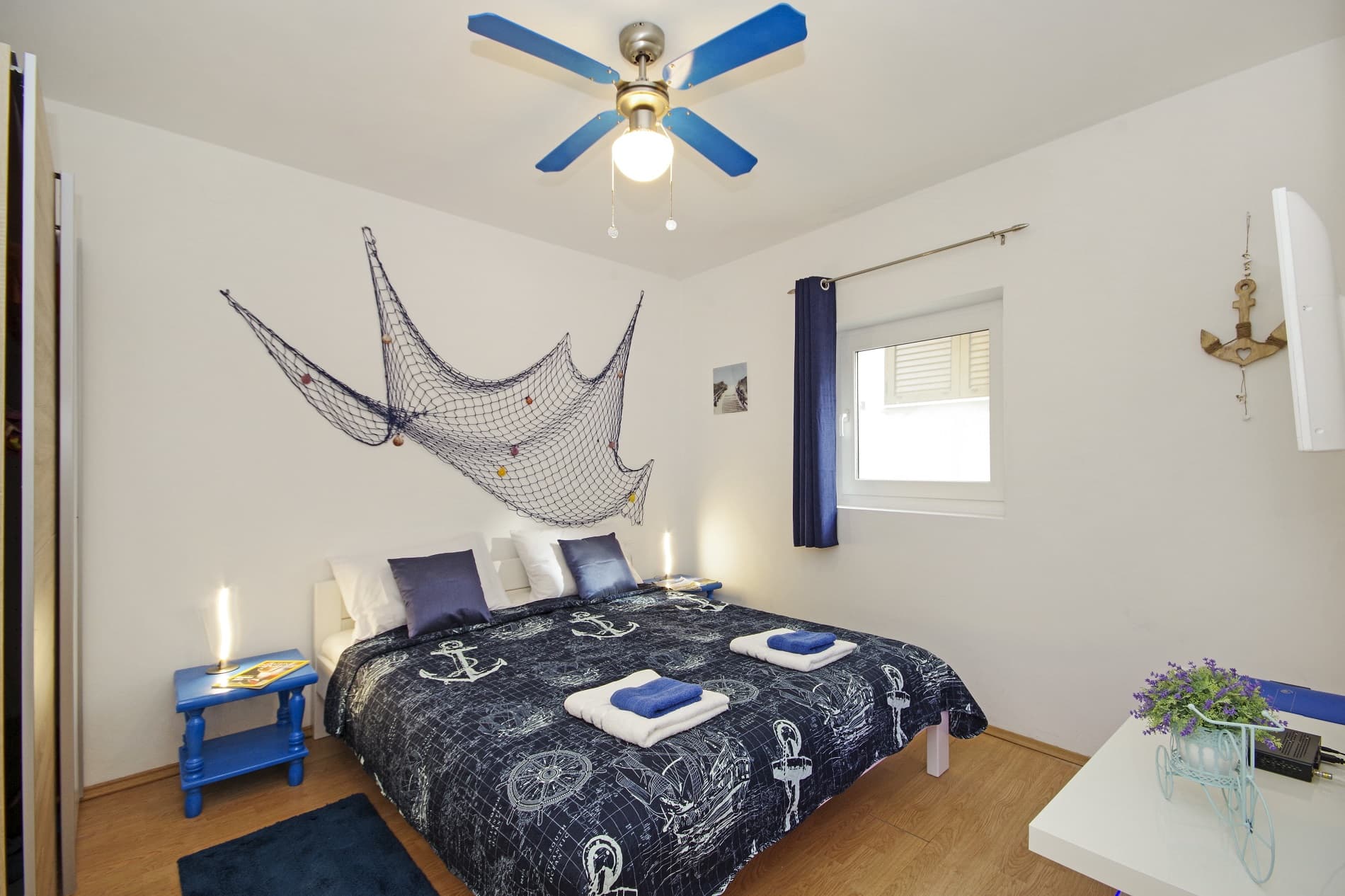 Traditional Dalmatian stone house located in the center of Betina consists of two modernly equipped apartments on the first and second floor of the house.

Dear guests! Thank you for having decided to spend your vacation in our apartments. We will do our best to meet all of your expectations and provide you with a pleasant vacation in peace and privacy.

Traditional Dalmatian stone house Žal located in the center of Betina consists of two modernly equipped apartments on the first and second floor of the house and a common terrace on the third floor with a beautiful view of Betina and the sea. Stylish and comfortable interior and peaceful surroundings offer a relaxing atmosphere ideal for your vacation. Each apartment has its own parking place 20 m from the house. In the immediate vicinity, there are restaurants, shops, post office, and the pebble beach is only 500 m away from the house. The friendly hosts will serve you a welcome drink. Arrival to apartments is from 2 pm and departure is until 10 am.

The terrace of 10 m2 is located on the third floor of the house. It is available for use by all guests. Here you can dry towels and relax on the sitting set and enjoy the beautiful view on Adriatic sea and Betina.

Check our YouTube channel for video presentation of our house, apartments, Betina and island of Murter

Prices are per apartment for one night.

Arrival to apartments is from 2 pm and departure until 10 am. Pets are not allowed.

Note: The reservation is made by paying 30% of the full amount on the bank account of the landlord and the rest of the amount is payable immediately prior to arrival or on the day of arrival to the apartment depending on the arrangement.

2. PayPal (all debit and credit cards)

Betina is a place located 35 km west of Šibenik on the northeastern coast of the island of Murter which is linked to the mainland by a mobile bridge in Tisno. It has just under 800 inhabitants. The name Betina comes from the Celtic word "bet" meaning - the mouth and describes the appearance of a naturally formed port of Betina that, like the mouth, protects ships from the wind. The site is under protection as a cultural monument due to the preserved historical town center. It is still called "the beauty of the old Mediterranean architecture".

Visitors, when they arrive, have a lot of things to see. We recommend visiting the Museum of Wooden Naval Architecture, Church of St. Franjo, Plitku Valu where the remains of the ancient Ville Rustica and the Old Romanesque cemetery were found, the church of St. Rok on the hill of St. Rok. In the vicinity of Betina and Murter, in the area of Gradina, there are remains of the ancient city of Colentum with old villas and cisterns. Nearby is the Old Christian Church of Our Lady of Gradina from the 6th century. On the island of Moster, only half a nautical miles from Betina are the remains of the Franciscan monastery from the 12th century.

Betina, along Korčula, is the most famous and oldest shipyard of the top shipbuilders building wooden boats. Betina gajeta is a well-known product of Betina shipbuilding dating back to 1740. Apart from the famous shipbuilders, residents of Betina were also known as shellfish growers.

Betina beaches are spread all over the place, and they are distinguished by the extraordinary beauty of the sea and attractiveness. The most famous are Plitka Vala, Kosirina, Zdrače, Bisage...

Are you interested in swimming, diving, cycling, and hiking on the surrounding hills, from which you can enjoy beautiful views of the surrounding villages and the surrounding islands? Besides swimming and other activities that will enhance your stay in Betina, for a pleasant and interesting evening, during the summer is always a rich evening program where everyone can find something for themselves.

We welcome you to Betina and beautiful island of Murter and wish you a pleasant stay!

The island of Murter is located in the northwest part of the Šibenik archipelago, separated from the mainland by narrow sea canal at Tisno which is spanned by a 12-meter draw-bridge. Asphalted road (6 km long) connects Murter with Adriatic tourist road, and distance from the city of Šibenik is 29 km.

Located at the entrance to the Kornati Islands (Murter inhabitants own most of the land), Murter is an attractive spot for yachtsmen and all lovers of quiet relaxation. The beginnings of tourism in Murter date back to the 1930s, when Czech Villa was built in Slanica cove. The economy is based on agriculture, olive growing, fruit growing, gardening, cattle raising, fishing, and tourism.

Murter offers various nice and quiet beaches, numerous restaurants and taverns, but any visitor to Murter will be especially thrilled if they choose to visit the islands of the Kornati in one of the organized tours. During the summer, there are various sports events, preceded by the April regatta Murter - Kornati as an introduction to the season. Except for Murter, the biggest and oldest settlement, there are three other settlements on the island: Betina, Jezera, and Tisno.

The Kornati Islands are the densest archipelago in the Mediterranean. Nowhere else in this large sea is such a great number of islands crammed in so little space. Because of ambiguous criteria of the definition of an island in general, there is no general agreement about their number. But we think that we shall not err much if we determine their number at 150. The area of the sea in which they are located is about 320 square kilometers.

Nature Park Telašćica is located in the central part of the eastern coast of the Adriatic Sea, in the south-eastern part of the island of Dugi Otok. For its extreme beauty, richness, and importance, this bay surrounded by 13 islands and islets, together with 6 islets inside the bay itself, was proclaimed a Nature Park in 1988. Telašćica acquired the status of a protected area already in 1980 because of its valuable flora and fauna, geological and geomorphological phenomena, versatile sea bottom life, and interesting archaeological heritage.

Nature park Vransko Lake - Because of its rare natural habitats, freshwater springs and biodiversity, Vransko Lake and its surroundings have been declared a Nature Park on July 21st, 1999. The Park limits are between Pirovac and Pakoštane. It stretches across 57 km², 30,02km² of that being the lake area itself, which stretches in direction north-west to the south-east, parallel with the sea-coast, from which it is, in some places, less than a kilometer apart. The lake is unique because of its position and characteristics, not only in Croatia but in other parts of Europe too. It is, in fact, a karst valley filled with brackish water as well as cryptodepression, which means that a portion of the lake lies below sea level.

National park Krka - Including the submerged part of the river at the mouth, the Krka River is 72.5 km long, making it the 22nd longest river in Croatia. It springs in the foothills of the Dinara mountain range, 2.5 km northeast of Knin. With its seven waterfalls and a total drop in altitude of 242 m, the Krka is a natural and karst phenomenon. The travertine waterfalls of the Krka River are the fundamental phenomenon of this river.